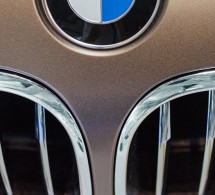 The second-generation BMW X5 M and X6 M have officially made their arrival for the speed-obsessed, crossover-loving masses that aren’t willing to turn to Mercedes-AMG or Land Rover Special Operations.

While the new models retain their 4.4-liter, twin-turbocharged V8s, power has increased from 555 horsepower to 567 ponies. Torque is up more significantly, climbing from 500 pound-feet to 553 pound-feet. The extra twist is slightly less accessible, with peak grunt arriving between 2,200 and 5,000 rpm, rather than the earlier model’s 1,500 to 5,650. Still, we’ll take the ten percent increase in torque as a net win.

The big powertrain switch sees the old X5/6 M’s six-speed automatic replaced with an eight-speed Steptronic transmission from BMW M. This new gearbox feeds power to an xDrive all-wheel-drive system that can variably shuffle up to 100 percent of power to either axle. In conjunction with the force-induced thumper under the hood, this powertrain arrangement allows both M models to hit 60 miles per hour in just four seconds. That’s a mightily impressive stat in a 5,000-plus-pound vehicle.

Sign up to recieve tip, news and offers from Bimmertech.